# Requirements for devices compliant with the LINE Beacon specification

You need to control beacon devices according to the broadcaster role (BLUETOOTH SPECIFICATION Version 4.0 [Vol 3], Part C Section 2.2.2.1) specified in the generic access profile so that LINE can detect the beacon devices quickly.

# Format of the advertising data

The advertising data of a LINE Beacon packet consists of three AD structures.

The format and values to specify are as follows.

The secure message is 7-byte data that consists of the message authentication code, masked timestamp, and battery level. It is used to prevent packet tampering and replay attacks. Secure messages transmitted from beacon devices are sent to the LINE Platform via LINE and then verified.

This section explains how to generate a secure message. 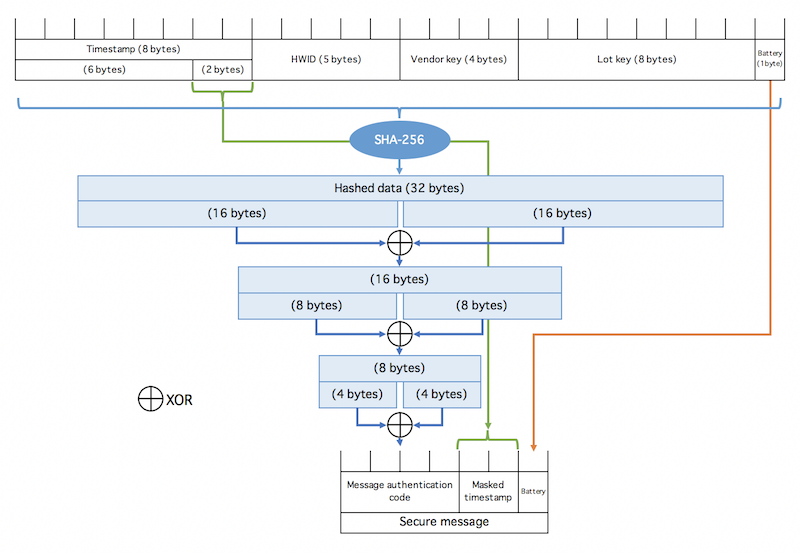 Generate a secure message by following the steps below.

Now you have generated a message authentication code.

Mask 6 bytes from the beginning of the timestamp and leave the last 2 bytes. This is a masked timestamp.

Concatenate the following items in the order listed:

Now you have generated a secure message.

The following parameters are used to generate a secure message.

LINE Corporation generates and manages the HWID, lot key, and vendor key. For details about how to obtain them, contact your LINE representative.

Services using the lot key and vendor key are available only to enterprise users.

This is remaining battery capacity. Use this parameter to determine when to replace the battery. The following table shows the meaning of each value.

HWID is used as the ID of a beacon device. HWID issued by LINE Corporation is a 10-character string in hexadecimal notation. Convert it to a byte array and write it into the beacon device as 5-byte binary data.

Print the HWID on the body of the beacon device.

A lot key is assigned to each lot. Lot keys issued by LINE Corporation are 16-character strings. Convert it to a byte array and write it to the beacon device as 8-byte binary data in the same way as the HWID.

A timestamp is an unsigned 64-bit integer.

A vendor key is assigned to each vendor. A vendor key issued by LINE Corporation is an 8-character string in hexadecimal notation. Convert it to a byte array and write it into the beacon device as 4-byte binary data as you would the HWID.

We recommend sending iBeacon packets to notify iOS devices that the LINE Beacon device is nearby.

For the AD structure and transmission interval of the iBeacon packet, see Apple's Proximity Beacon Specification document. You can download this document from the iBeacon section of the Apple Developer site (opens new window).

The following table shows the parameters specific to the LINE Beacon specification that you need to include in the iBeacon packet.