If an error with status code 5xx occurs when sending a reply message or push message using the Messaging API, or if the request times out, the message may not have been correctly delivered to users. However, if the same API request is executed in succession, users will receive the same message twice if the first API request was accepted correctly.

No matter how many times the API request containing the same value of a retry key (X-Line-Retry-Key) is executed, since it is always accepted only once, it prevents the same process from being duplicated. If the request has already been accepted, the re-request is blocked and the status code 409 is returned.

Using a retry key, you can safely retry a request without duplicate API requests being processed.

X-Line-Retry-Key allows you to safely retry API requests without duplicating messages, but it doesn't guarantee reliable delivery of messages. If an API request is accepted (HTTP status code 200) by the LINE platform even once, it won't be possible to retry the same request, even if it couldn't be delivered correctly because the user has blocked the LINE Official Account.

If you use endpoints that can retry API requests using retry keys, use this flow to implement them. 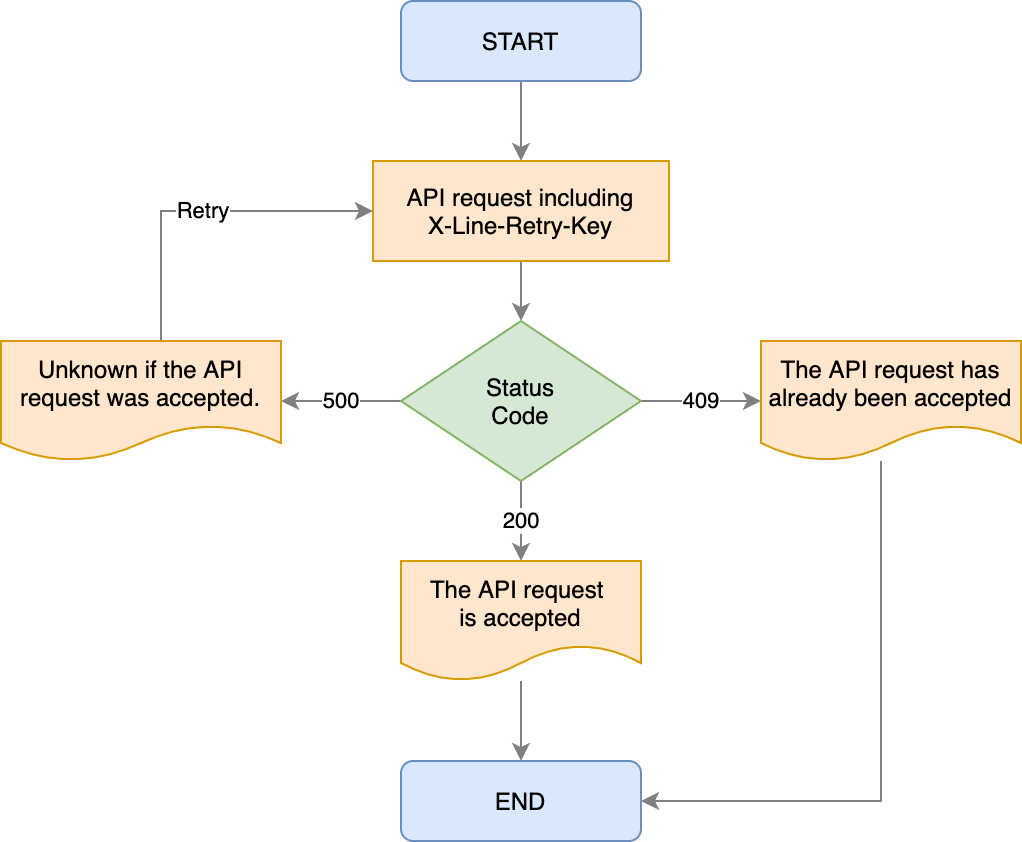 When using these endpoints, always specify the retry key (hexadecimal UUID generated by any method) in the X-Line-Retry-Key request header.

Specify the retry key from the first API request

For APIs other than the above

For APIs other than the above, retry keys cannot be specified. If you include X-Line-Retry-Key in the request header, the API request will be rejected and the status code 400 will be returned.

Design how to retry an API request according to the response status code as follows.

Note
The interval between retries

# Response when API request is retried

The response depends on whether the API request has been accepted.

Request ID is different for each request

If multiple requests including the same retry key are executed, each request will be assigned a different request ID.

# Example response to a request that has been accepted

This response is the same as the response when no retry key is specified.

# Example response when retrying a request that has been accepted once

If an API request including a retry key has already been accepted, the status code 409 and the request ID of the accepted request will be included in the response header as x-line-accepted-request-id.