You can create bots to send messages to users at any time, or reply to messages from users with reply messages. You can also use various types of messages.

The Messaging API provides two main types of sending methods to use.

# Reply to messages and actions from users (reply messages)

Reply messages are used to reply to the user with a message when the user adds your LINE Official Account as a friend or sends a message.

The body of the message should contain the same reply token that was part of the webhook event. You can send up to 5 message objects in a single request.

# Send messages at any time

You can send messages to users at any time by one of the following methods:

You can send up to 5 message objects in a single request.

How to count the number of messages

Also, if you send a message to a user ID that has blocked the LINE Official Account, a user ID that doesn't exist, or to any other users that won't actually receive your message, it won't be counted as one message.

This technique lets you send a message to multiple users at any time. You can specify recipients using attributes (such as age, gender, OS, and region) or by retargeting (audiences). Messages cannot be sent to group chats or multi-person chats.

You must prepare different kinds of data for different types of recipients. You can combine these recipients using logical operators (AND, OR, and NOT). For example, the recipients could be all users who have either received message A OR clicked a URL in message B.

If you have created an audience, follow the instructions below to confirm that it's ready to accept messages.

# Confirming that an audience is ready to accept messages

Audiences are created asynchronously in the background. Confirm that an audience's status has changed to READY (ready to accept messages) before you start sending it narrowcast messages.

You can check an audience's status via the following API endpoint.

Once the status property in the response has changed to READY (ready to accept messages), you may begin sending narrowcast messages with that audience given as the recipient.

Learn more about checking an audience's status from Get audience data in the Messaging API Reference.

By combining these objects in a narrowcast message, you can specify the target of the message based on complex conditions.

For example, you can specify a message target based on complex conditions such as women not aged between 15-20 years old who are included in both audiences. 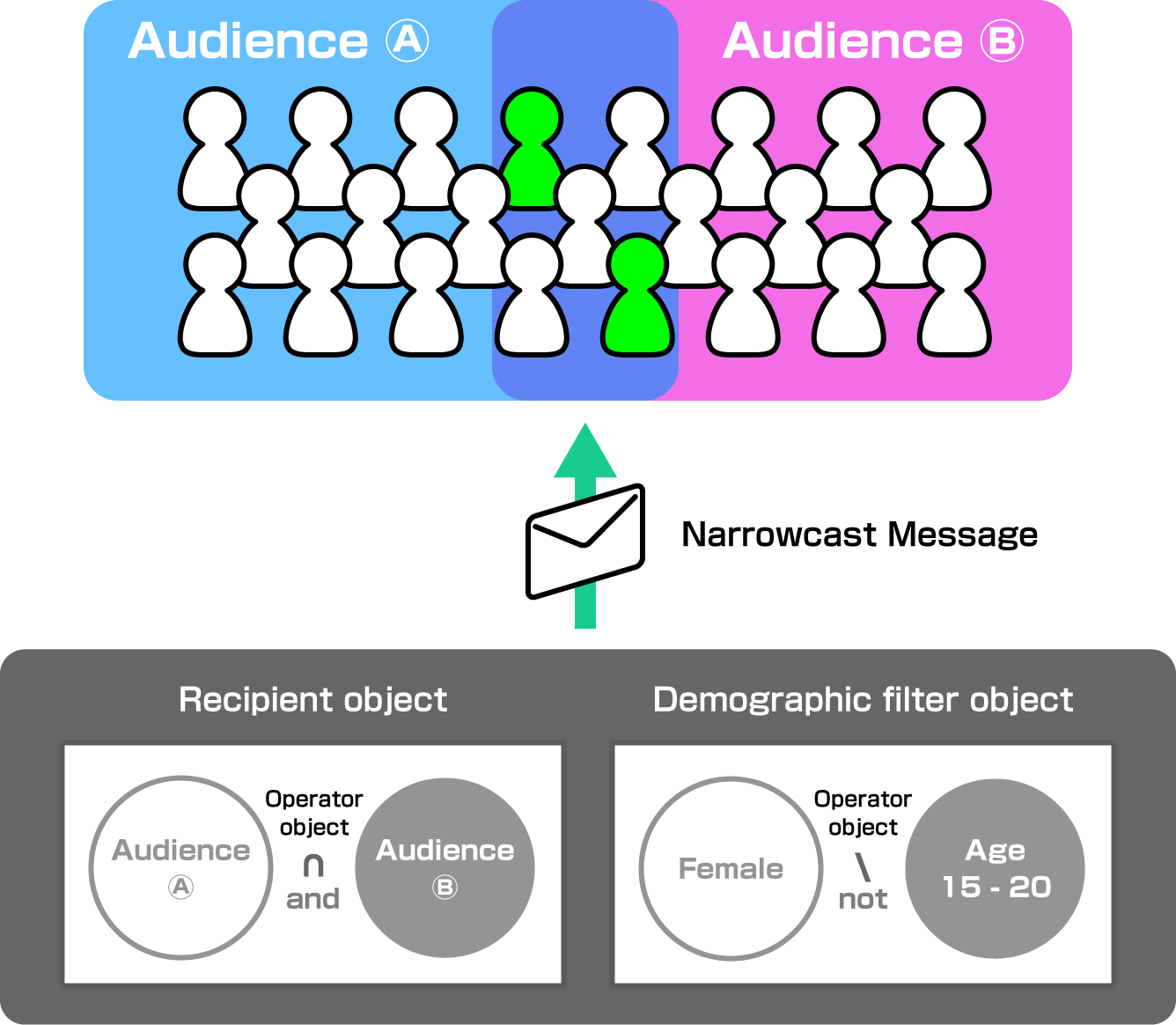 The recipient object can represent a complex set of criteria using logical conjunctions (AND operators), disjunctions (OR operators), and complements (NOT operators).

If you try to send a message that exceeds the maximum number of messages that can be sent, the delivery will fail.

Messages can be sent within the maximum number of deliverable messages by specifying the limit.upToRemainingQuota property.

For more information on the maximum number of messages that can be delivered, see Messaging API pricing.

Maximum number of narrowcast messages to be delivered

However, if the maximum number of messages set in the limit.max property doesn't exceed the monthly limit, you can send a narrowcast message.

By setting the limit.upToRemainingQuota property to true, even if you exceed the limit, you won't receive an error. The number of messages to be delivered will be automatically capped by the limit. However, if there are zero messages that can be delivered, the status code 429 Too Many Requests will be returned.

To get the approximate monthly limit, use the Get the target limit for sending messages this month endpoint.

For more information on how to set the approximate target limit, see Messaging API pricing.

Other messages may fail to send until narrowcast delivery is complete

When you send a narrowcast, regardless of the actual number of messages being sent, you may reach the approximate limit for the messages you can reserve for the month. Once you reach the approximate limit, you would have to wait until the narrowcast delivery is complete, as you can't exceed the limit. If you attempt to send another message in that state, You have reached your monthly limit. will be returned, and the message will fail to send. This will occur if the following two conditions are met:

Once the narrowcast delivery is complete, you will no longer be exceeding the approximate limit, so you can resume sending messages.

To prevent delivery failures, set limit.max to a number that doesn't exceed the upper limit when sending a narrowcast. By setting limit.max correctly, you can control the number of messages that are reserved for narrowcast delivery.

Specify either the audience object or the redelivery object in the recipient object.

Set the audience ID to the audienceGroupId property to specify the target of the message.

To create an audience, use the managing audiences API.

Conditions for specifying the request ID

The request ID specified in the requestId property must satisfy all of these conditions:

On the "there weren't enough recipients" error message

If errorCode with the "An error occurred because there weren't enough recipients." error message is returned when sending a message with the request ID of a previously sent message specified in a redelivery object, these may be the causes.

To prevent someone from guessing the recipients' attributes, narrowcast messages can't be sent when the number of recipients is below the required minimum amount. For more information, see Restrictions on sending messages using attributes and audiences in the Messaging API reference.

Example of a recipient object representing a redelivery object

For more information on the audience object and redelivery object, see Recipient object in the Messaging API reference.

By specifying the demographic filter object (filter.demographic property), you can distribute a message segmentally based on the attributes (gender, age, type of OS, region) of your friends.

By using the product set (AND), the union set (OR) and the difference set (NOT) of operator objects, multiple conditions of the recipient object and the demographic filter object can be combined to specify the target.

By using each operator object (AND, OR, NOT), multiple targets can be combined as follows:

Example of a recipient object that combines conditions with operator objects

Using operator objects, you can specify the recipient objects and the demographic filter objects to be sent in a nested structure. Operator objects are applied in order from the deepest level of nesting.

In the following example, the target recipient is interpreted as "users who fit A, B, and E, excluding users who are C and D (AudienceA AND AudienceB AND NOT (AudienceC AND Audience D) AND Audience E)". 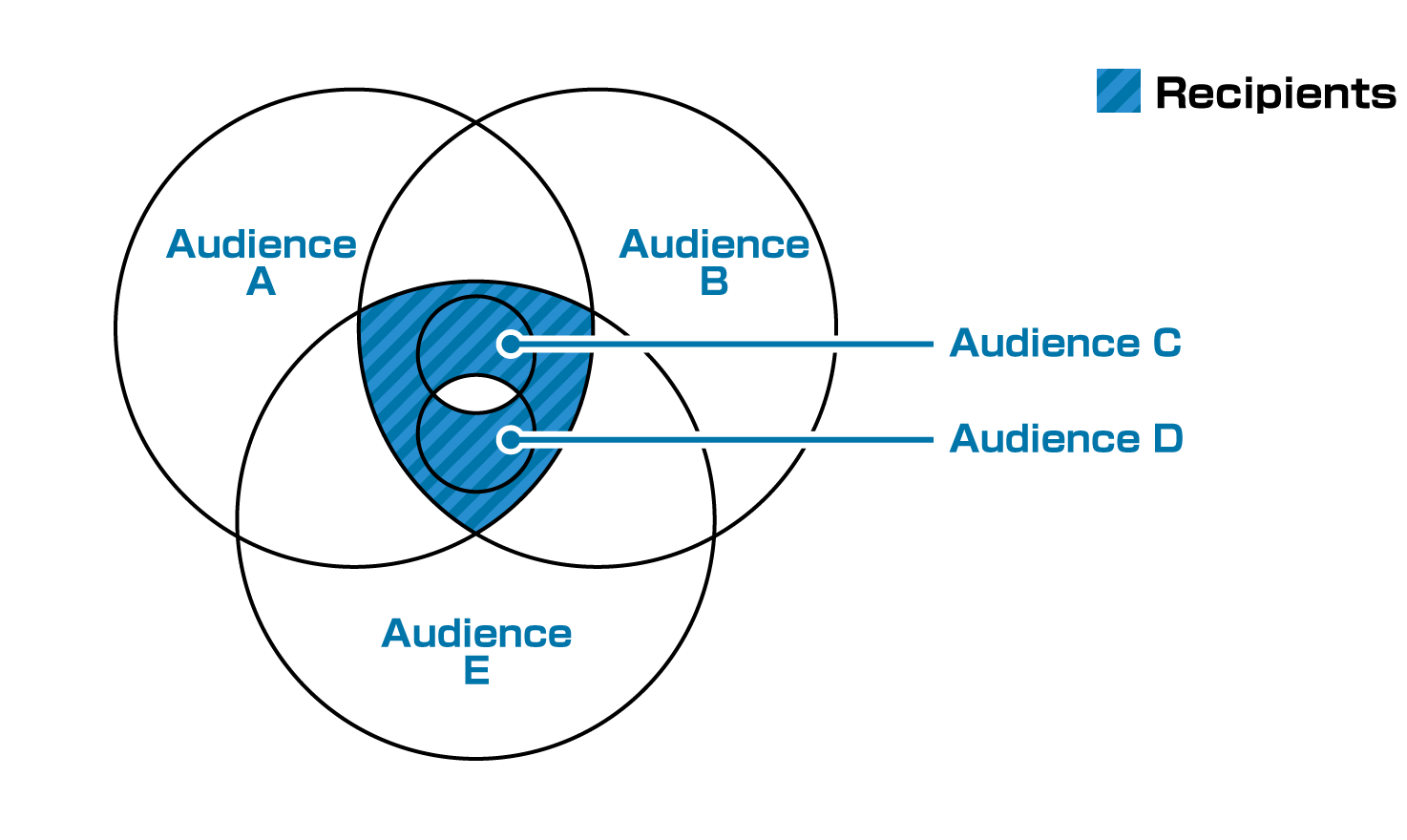 # Example of a narrowcast message request

The following is an example of a request to send a narrowcast message with the following conditions:

# Checking the status of a narrowcast message

Learn more from Get narrowcast message status in the Messaging API Reference.

When using narrowcast messages, take note of the following: